Grab onto a piece of history with Wilson’s official NFL game ball–The Duke–which is dedicated to football legend Wellington “Duke” Mara. More than just a piece of memorabilia, The Duke is designed with the serious competitor in mind, with genuine hand-sewn, Tanned in Tack leather for superior playability and grip, and 3-ply VPU bladder for maximum durability and air retention. Other features include double lacing, the official NFL seal in gold, and Commissioner Roger Goodell signature stamp. The return of The Duke. Wellington “The Duke” Mara passed away in October, 2005 at the age of 89 after dedicating 81 years to the New York Giants as an administrator, owner, and unwavering booster. In 1940, heeding the advice of influential team owners Tim Mara of the New York Giants and George Halas of the Chicago Bears, the NFL selected Wilson as the league’s official football supplier. The following year, Wilson introduced a redesigned football and named it “The Duke” in honor of Mara’s son, Wellington. The Duke stayed in play for nearly three decades until the NFL and AFL merged in 1969. 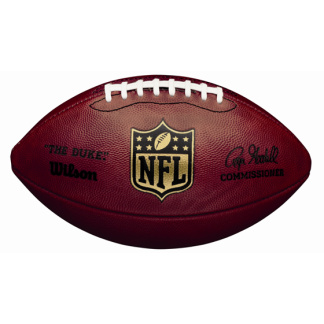